You are seeing this message because you are using the Internet Explorer web browser. Internet Explorer has not been updated with new features since the release of Windows 10 in July 2015, so it doesn't support the modern standards that our website uses. We recommend switching to Google Chrome, Mozilla Firefox, or Microsoft Edge, all of which our website is tested with. 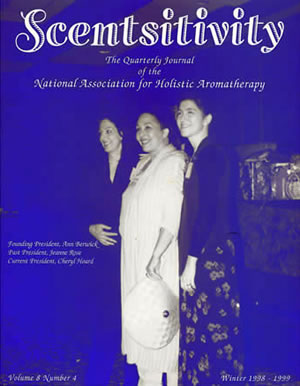 The founding members of The National Association for Holistic Aromatherapy (NAHA) came together in 1990 in Boulder, Colorado, during a 10-month correspondence course with the London School of Aromatherapy. Patricia Davis, well known author of Aromatherapy A-Z and Subtle Aromatherapy, was the originator of the course. Ann Berwick, who had just moved to Boulder had been a long-standing tutor for Patricia's course in England and arranged to sponsor training in Boulder by being the local principle tutor. Ann reviewed and graded our homework and was available for endless questions. Patricia came to Boulder three times during the course of the training to provide the practical component of the course including: the full body aromatherapy massage component in the tradition of Margurite Maury; an extensive blending workshop for therapeutics and aesthetics; consultation and documentation skills; specialized body treatments for cellulite, sinusitis as well as oral and practical exam of the aromatherapy massage. At the completion of the course, we committed to develop an association of aromatherapy students, practitioners and the lay public interested in promoting high standards in aromatherapy education, and to support the uses of aromatherapy in daily life. At that time, the American Aromatherapy Association (AATA) had just sponsored a highly successful aromatherapy convention in Santa Monica, CA. Since the AATA membership was largely based in California, we aspired to create local energy and support for aromatherapy in the Rocky Mountains.

We met as a group for three hours weekly at Dawn's (see below) house for the most part, and somehow succeeded in staying regular with meetings. We assigned ourselves and each other to do; e.g., registering the name (Debra Bowley); having a logo designed (Elaine Jackson); collecting and writing newsletter material (Ann Berwick); coordinating advertising (Mary Jane Dixon); gathering a mailing list (Laraine Kyle, then Pounds). We bartered our aromatherapy massage and blended products to our graphic artist and to a consulting attorney (both friends of Elaine). This was definitely grass roots!

With delight, we invited well-known aromatherapist leaders in the field to serve on the steering committee. The original steering committee was made up of Robert Tisserand, Patricia Davis, Ugal Uthra, John Steele.

Ann Berwick generally facilitated our meetings, was later voted in as president and ultimately became the editor of our newsletter, Scensitivity, with her teenage son helping with layout design and computer input. Collectively, we planned the categories we wanted to cover in the newsletter, such as the calendar of events, new products, book reviews, feature articles on a particular oil, case study, etc.

As the members in the Boulder core-founding group became involved in establishing personal businesses, maintaining livelihood, having babies, getting divorced, etc. the base of support for the association dwindled. Ann took over answering most of the mail when our secretary bowed out. Laraine helped with advertising, when Mary Jane phased out, and so on. Jeanne Rose became a great help maintaining the energy and enthusiasm. Laraine eventually took over the responsibility for association correspondence (generally Sunday afternoons), which ultimately became too demanding.

Following are short biographies on our founding members:

Ann Berwick had been studying, practicing and teaching aromatherapy for 13 years. She studied aromatherapy with Shirley Price and Patricia Davis at the London School of Aromatherapy (LSA) and taught there part time for six years. She managed her own skin care and alternative therapy clinic in England before returning to the States in 1989. At that time, Ann sold essential oils under the name Quintessence Aromatherapy Inc. and sponsored the LSA Correspondence Course. In 1991 she begin teaching her own course. Her book Holistic Aromatherapy was published in 1994. She had a baby soon after our London School of Aromatherapy training ended. Today, Ann as an esthetician continues to provide skin care services and aromatherapy massage. She is very excited about her newest venture at a spa called Essentiels where she is teaching true aromatherapy techniques to the estheticians and massage therapists there. In addition, she is creating a line of products for use at the spa. Currently, she is preparing to take her knowledge and products to various spas around the country. In her spare moments, she enjoys parenting five-year old Natasha with her husband Robert.

Elaine Jackson, secretary, came into the world of aromatherapy through her love of wildphotography. She had a business making candles with wildphotography and silk screening T-shirts with multicolored pictures of Colorado wildphotography. She wanted to locate and sell pure quality essential oils. I remember her frustration in ordering essential oils in bulk quantities and not receiving the same oils as the sample that had been sent in advance. She gave up the project realizing how difficult it would be to ensure purity without considerable cost. Elaine had an art/massage studio adjacent to her wildflower business and had a large following of loyal clients. I tracked down Elaine down by phone recently and can report that she and Doug still have their wildflower business, Rocky Mountain Wild photography, which includes mail order sales of their Rocky Mountain wildphotography and candles, bookmarks and framed wildflower collages with pressed or dried photography.

Mary Jane Dixon, advertising and research officer, worked previously ad a medical technologist, performing laboratory testing in hospitals and clinics, and was also involved in sales and marketing for two medical companies for ten years. Mary Jane had studied aromatherapy with Judith Jackson and was not a London School of Aromatherapy alumna. Mary Jane was especially interested in promoting education and clinical aromatherapy at her Aromatherapy Scenter - a day spa/massage studio with retail sales of Judith Jackson Aromatherapy products, primarily. After several years Mary Jane closed the studio and accepted a position in Alaska. She now resides in Memphis Tennessee, and is working in a forensic laboratory, which she enjoys.

Dawn Singer-Krest was a highly skilled certified massage therapist before her involvement in aromatherapy. She was a certified infant massage instructor and had worked for ten years in a chiropractic clinic and at the Colorado Back School. Dawn continued to develop her massage practice with the integration of essential oils until she was seriously injured in an automobile accident, which resulted in a major spinal injury. Dawn's physical rehabilitation continues with walking again being her primary focus. While restricted to her wheelchair, Dawn is studying cranial/sacral massage, which she can provide from her wheelchair. She has experienced many life changes as a result of the accident and is not directly involved in aromatherapy at this time.

Deb Mosher (Bowley) came into aromatherapy with ten years experience as a licensed cosmetologist and became skilled in aromatherapy massage. She now blends aromatherapy products and sells them under the name Ascention. She wholesales her products through the Denver Merchandise Mart and retails them at local health fairs. Deb gave birth during our training and has since had a second child.

Laraine Kyle was the exclusive distributor of a premiere line of Japanese incense 1986-1989, selling wholesale and retail nationwide, under the name White Cloud Incense, when John Steele of the American Aromatherapy Association reintroduced her to essential oils. He called to ask her to write an article for AAA's journal, as many people did not know about incense as aromatherapy. She sent John a video about Koh-Do, the Japanese incense ceremony and the traded Japanese incense for essential oils. When she received John's sample of about ten essential oils, she knew she wanted to work them into healing and reconnect to her nursing career. She met Ann Berwick soon after by suspicious coincidence and soon enrolled in the London School of Aromatherapy course and the rest is history. She closed her incense company, though her incense supplier Shoyeido Incense Co., continues to distribute incense from a US branch in Boulder.

Laraine had a clinical nursing background when she entered the world of aromatherapy in a serious way, working as a psychiatric clinical nurse specialist and certified massage therapist. She graduated from the London School of Aromatherapy course she continues to work as a psychiatric nurse clinician and educator in a variety of settings. Last fall 1996, she graduated nine students from a basic aromatherapy course of study, consulted with nursing homes on aromatherapy for Alzheimer's and operated a mail order aromatherapy business, Resources for Living Well, featuring Shirley Price aromatherapy products. She has learned that making a living doing aromatherapy massage in Boulder is next to impossible since there are 1200 registered massage therapists in Boulder.

She has had some success in promoting the acceptance of aromatherapy as a palliative intervention on a med-surg unit at Boulder Community Hospital and facilitates periodic "quality of life" discussion groups with simple blending experiences with body lotion and bath gel as carriers. Laraine teaches an aromatherapy certificate course, aromatherapy massage and skin care and specializes in aromatherapy for hospice

Not a member yet but would like to stay up to date with NAHA? Considering joining but would like to explore the National Association for Holistic Aromatherapy more? Join our e-newsletter today and stay in touch.

Our office hours are 9 am to 5 pm Mountain time, Monday - Friday.

The National Association for Holistic Aromatherapy is a 501(c)3 non-profit association.

All material provided on this website is provided for informational or educational purposes only, and is not intended as a substitute for the advice provided by your healthcare professional or physician.